The Yosemite Leadership Program welcomed back its student participants yesterday with great excitement to have both the first and second year cohorts reunited after a long, well deserved month away.  The YLP crew is in for a wild ride in the coming months, as campus and park facilitators are coordinating numerous events and outings for the semester!  February will start with a bang as the participants take an exhilarating trip to the EDGE Ropes Course at CSU Fresno, take a behind the scenes tour of Alcatraz, and the second years begin to finalize preparations for their community-impact capstone projects.  In celebration of Black History Month, on February 28th YLP will invite the UCM and Merced communities to welcome back Shelton Johnson, a well respected interpretive ranger in Yosemite National Park who's been recognized for his part in the Ken Burns film, National Parks - America's Best Idea, by both President Barack Obama as well as Oprah Winfrey. 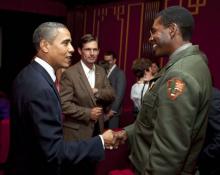